Everyone knows what a traditional planter looks like, and that’s great, if you’re planting a traditional garden or planning on leaving the planter mostly hidden. However, if you’re using your plants or flowers for decoration in themed spaces or inside the house, you might want to opt for something a little different than what you may find at the dollar store. Having fancy planters doesn’t mean you have to spend a fortune at the shops or online though. In fact, almost anything could become a planter if you choose to use a little imagination.

One material that lends itself beautifully to building planters is wood. Whether you’re repurposing a crate, taking advantage of leftover pallets or making use of old barn wood, you can rest assured that there are plenty of ways in which it can be used. Let’s have a look at these creative DIY wood and pallet planter boxes to style up your home. 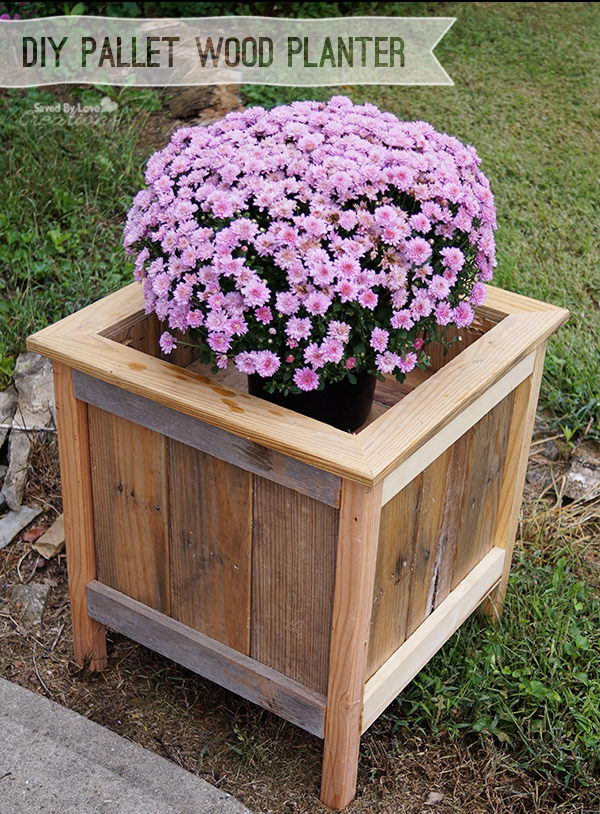 This box planter looks really great for something that is made exclusively out of pallets, which are one of the simplest and easiest materials to work with. via savedbylovecreations

This planter box is a little different, as the wood looks distressed and it takes some more work to achieve a similar look. The box structure is simple enough to put together, but the sides are made with pieces that are arranged in triangle shapes to create the chevron, which looks more beautiful and dimensional if various colors or at least hues of wood are used, as you can see. via stuffsethmakes

The pallet wood box is a two-in-one, as there is a planter at the top but also a semi-hidden compartment at the bottom. Open the door at the side and you will find a hose holder, complete with a hole at the back for it to come out of. via diycandy 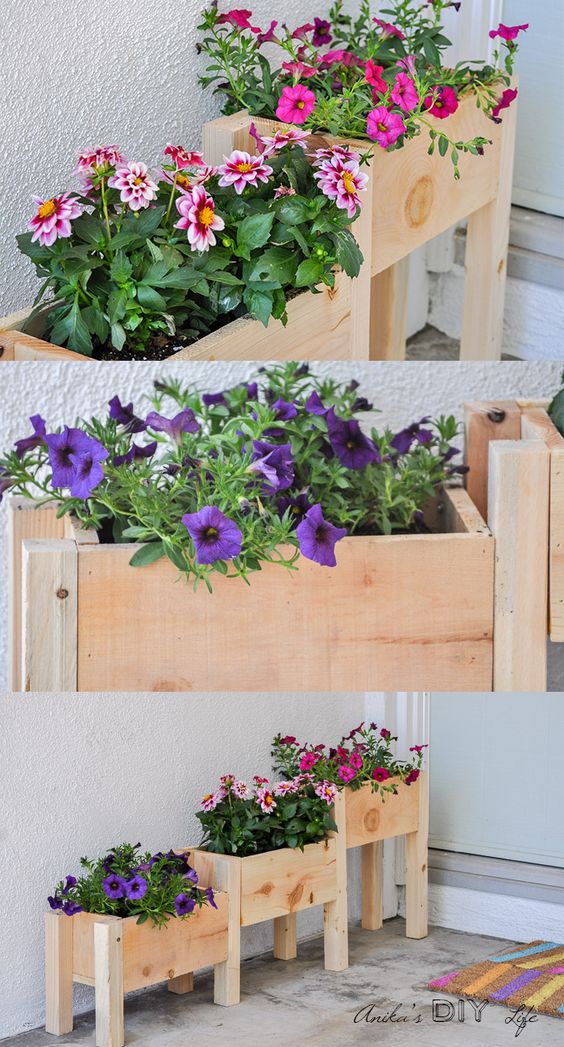 This project doesn’t feature one planter, but rather three identical pieces. These boxes are propped on legs of contrasting wood, and they have been installed so that the different heights are fairly noticeable from all angles. via anikasdiylife

This planter creates a beautiful effect as it was built in layers to hold several flower pots at different heights, effectively creating a cascading arrangement. via hertoolbelt

It is another two-for-one project, as two large chevron pallet wood boxes have been installed on the same structure, creating a layered piece that looks good and helps save space. via jenwoodhouse

This is a different planter/hose storage combination, where a literal pallet box was built. The planter is at the top, but you can remove it to take the hose in and out of its hiding place. via thatsmyletter

The end result of this project is indeed very stylish, as these distressed wood planters bear an unusual octogonal shape at the top. The different wood colors and shapes add interest and dimension to the piece. via instructables

Painted Flower Pots Made From Pallets

These beautiful ombre colored flower pots are made using pallet wood, which is usually readily available and quite accessible. The pallets make the gradient easy to achieve and give the piece a fence-like charm. via hgtv 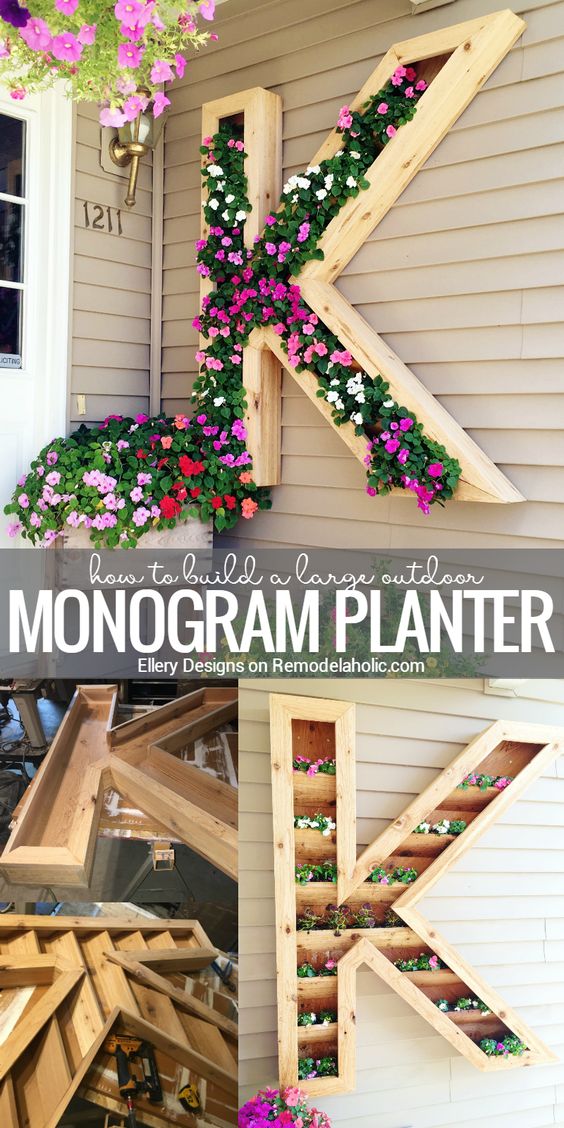 This monogram planter box is certainly not something you come across every day. It is made using a tiered hollow letter box, in which flowers are planted so that they completely fill up the inside and create a flower monogram. via ellerydesigns 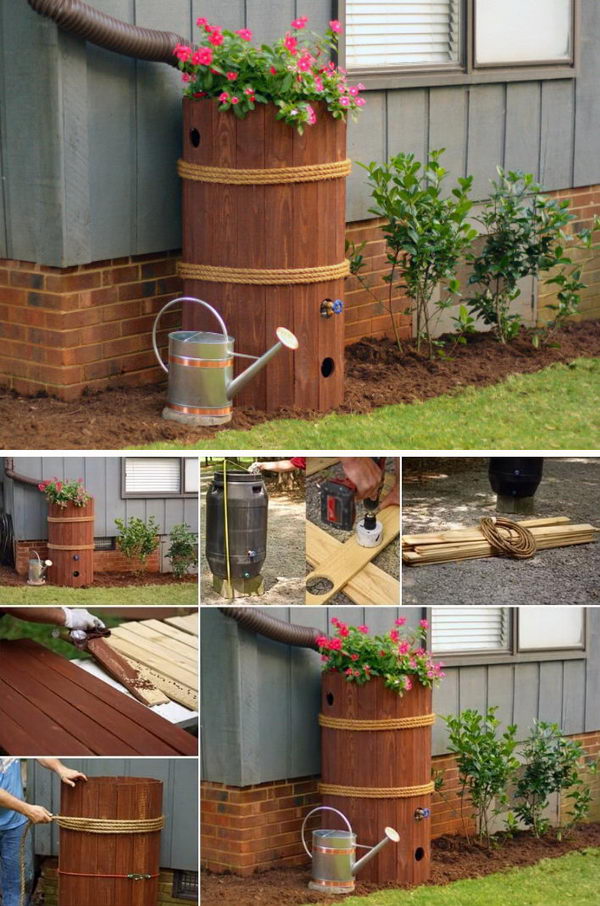 This project is really cute, as this tall round box mixes a planter with a rain barrel. The effect was achieved with rich pallet wood and rope. via hgtv

The Versailles planter may look quite different, but is in fact quite easy to make. It is in fact a pallet wood box with an X-brace structure which was painted a dark charcoal color to get its striking look. via therozyhome

The large planter looks very diferent because of its white color and long shape, but also because it has little wheels. The big advantage of this is that it can be moved, perhaps to follow the sun, if the plants require it. via fourgenerationsoneroof 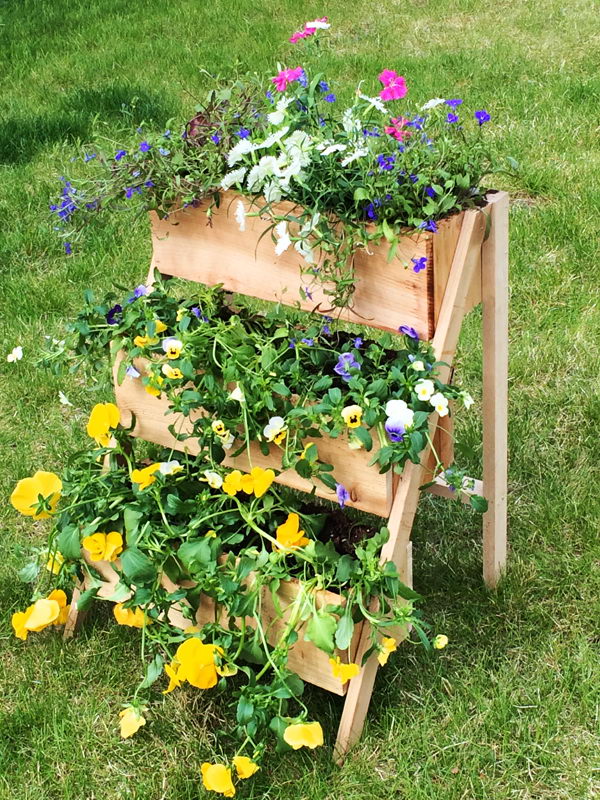 This triple planter, which houses a number of gorgeous and colorful flowers, has a ladder-like tiered structure so that it can hold the different flowers and make a colorful cascade. via ana-white

The charming dark wood door number plaque has a small planter box at the end to greet guests with a small yet cheerful bunch of flowers. via bemyguestwithdenise

These natural colored crater planter boxes resemble the Versailles style with the crossed planks at the side, but are instead light and airy, which goes well with the entry space they are in. via centsationalgirl

Here’s a great example of how to make a great planter from wood scraps. This one uses leftover fence pieces which give it a very unique look. via thatsmyletter

This gorgeous planter box is made out of fence pickets and cost only $20. A wash of pastel blue paint adds the finishing touch to this particular piece. via bowerpowerblog

This is another tall planter, but it is made using rich wood pieces arranged vertically. A crossed rope accent adds a rustic vibe to the piece. via cherishedbliss

This project is really unique, as a full wall of crater-like planters was created here. The planters are stacked asymetrically, which gives this piece its unique look. via manmadediy 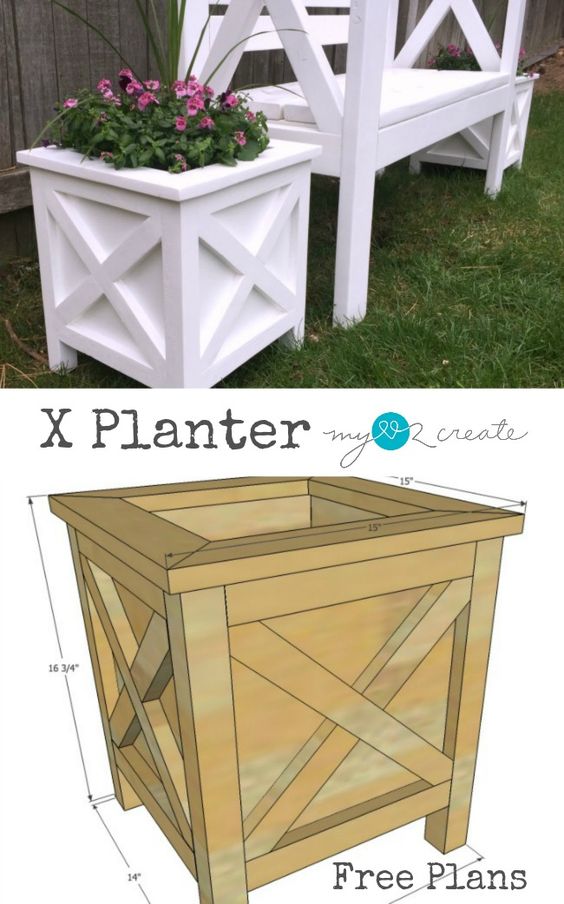 This planter box is much like others with its X design at the sides and short legs slightly propping it up. It has a smaller opening at the top for the plants to sit tight and it was painted to match the outdoor furniture. via mylove2create

This is a bit of a recycling project, as it was made using reclaimed wood of different colors, in order to create the decorative chevron pattern at the side. Unlike other boxes, this one sits directly on the ground. via mysweetsavannahblog

Yet another fantastic idea is to create a box that has a trellis rising up from its back, allowing the plants to grow tall. These project can be done in many different ways and with different trellis patterns, as you can see. via thisoldhouse 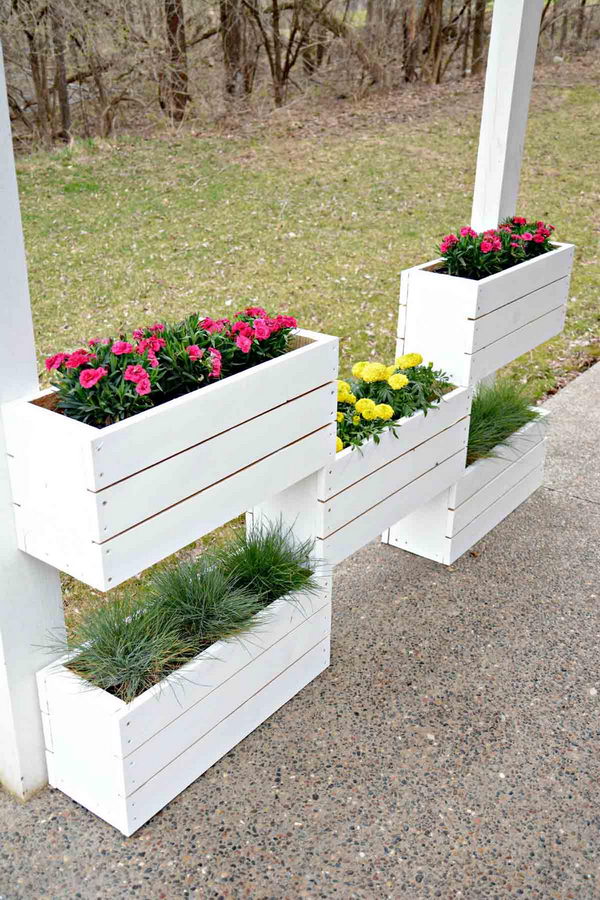 Here’s another seemingly gravity defying planter box project. This one has five white pallet boxes stacked diagonally from the middle, only meeting at the edges, which makes them look as if they are suspended in the air. via decorandthedog 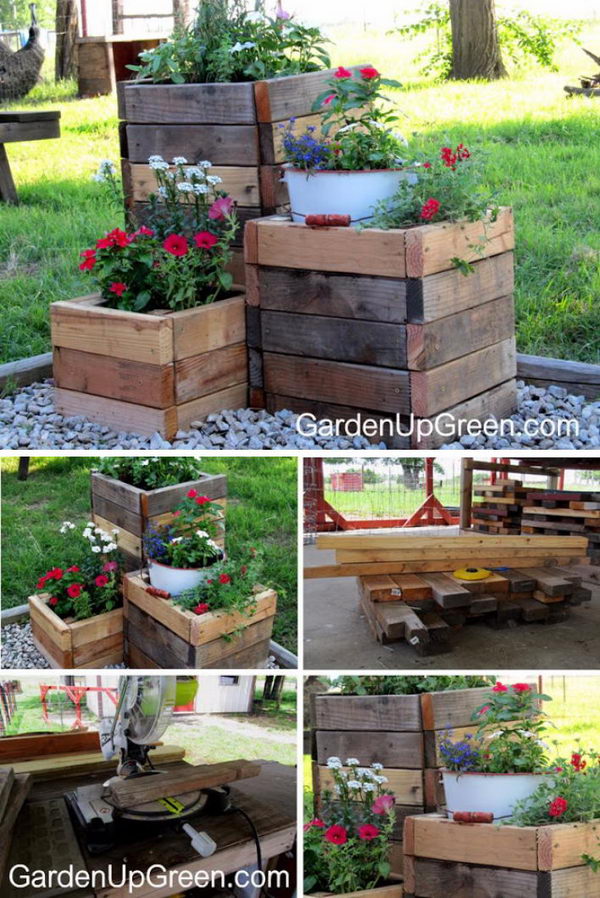 These dark planter boxes have a very rustic vibe to them, as they are made from wide planks of reclaimed wood stacked on top of each other horizontally. The boxes themselves create a tiered ombre effect, as they have different heights and colors. via gardenupgreen

This isn’t just any box – it is the home to little garden fairies and whimsical creatures. Magical creatures aside, the box is quite traditional in construction, though reclaimed wood was used which enhances the whole wood creature theme. via makeit-loveit

The long white planter box was not installed on the ground but instead hung at the edge of the deck’s railing, adding extra beauty to an area that is gorgeous by default. via yellowbrickhome

This light natural colored construction is yet another example of multiple stacked planter boxes, which appear to be fashioned from pallets.In this case though, the boxes have slightly different heights and are stacked unevenly across a fairly visible supporting structure. via thatsmyletter 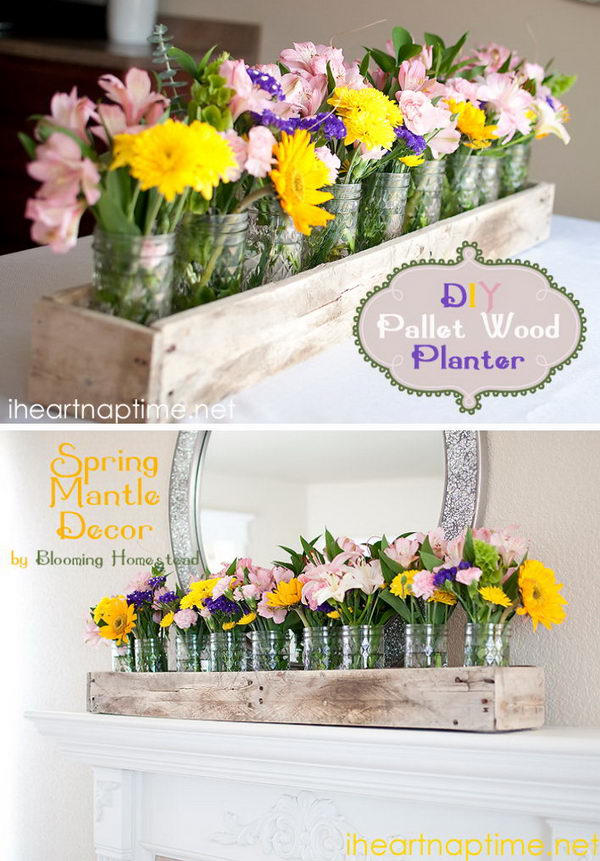 This pallet wood box is somewhat unusual because it is very long but not tall at all. The pallet wood was made to look distressed rather than brand new in this case. via iheartnaptime

This dark painted trellis planter is another great example of how you can combine a planter box and trellis, so that your plants can grow tall. The box itself is just typically long, and the trellis is made of wood pieces crossed vertically as well as horizontally. via deucecitieshenhouse 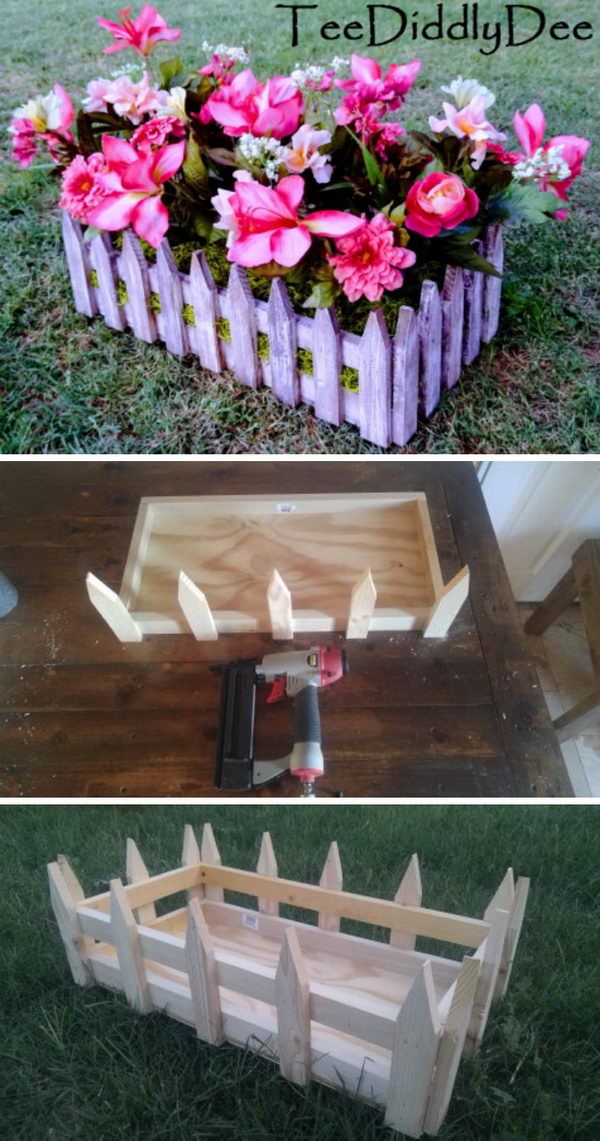 A little crater box and some sharpened wood pieces were painted and used here to create a planter that just looks charningly like a picket fence. via teediddlydee

This is another great space-saver idea, as the wooden box was built with a removable planter top and left hollow inside for storage, which is revealed when you open the door at the front. via minhasconjecturas 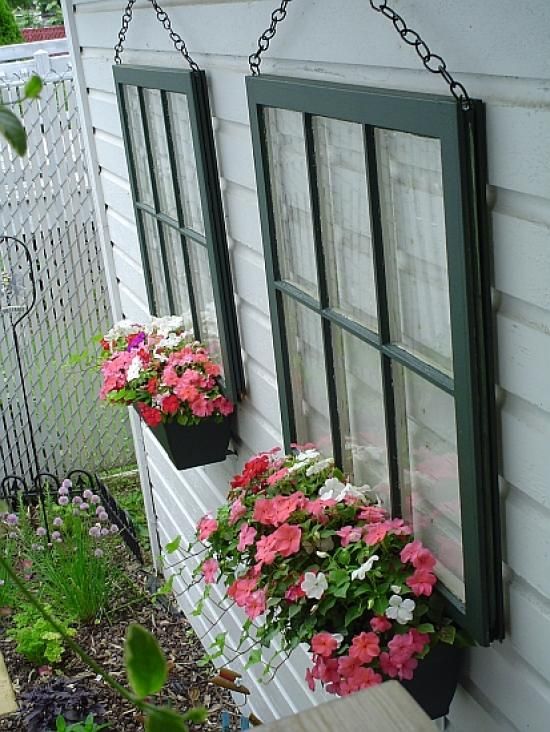 These window panes were repurposed into planter boxes as a small box was built at the sill and they were hung simply along the outside wall of the bulding. via pinterest 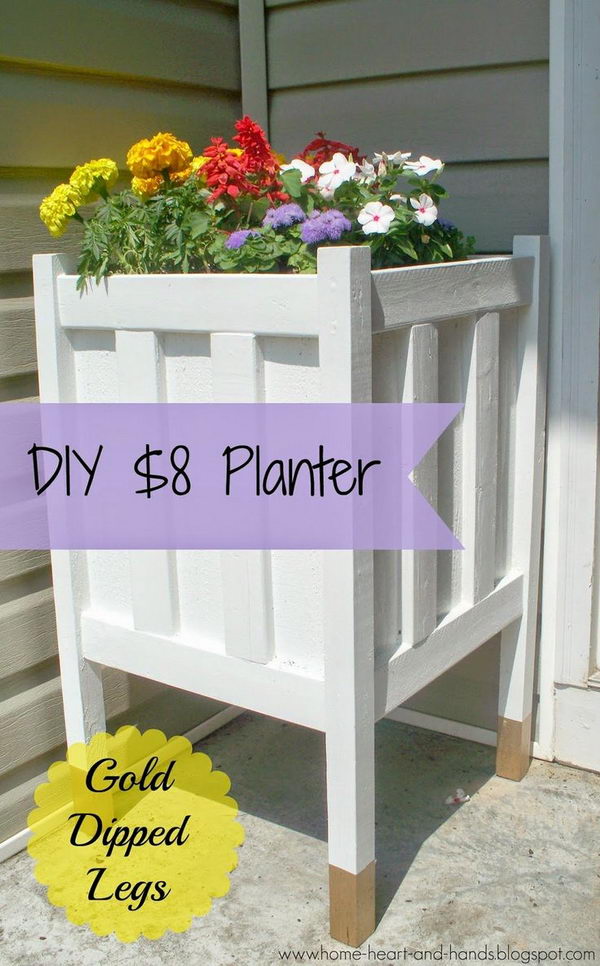 This porch planter may seem really simple, but the details make it quite fun. It has parallel vertical wood strips evenly spaced all around and the legs are painted gold at the bottom, which adds a little sophistication. via source

These taller white porch planter boxes look really elegant with their simple geometric inlays at each side. You can make these really easily with scrap wood to apply on new pieces or remodel old ones. via realitydaydream

Porch Planters Made from Old Drawers 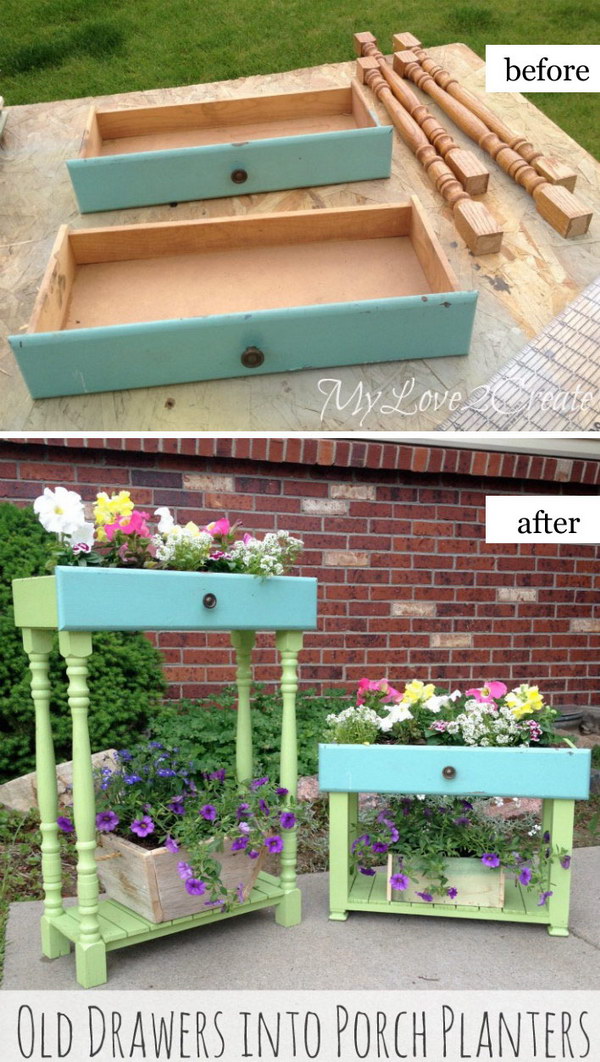 Here’s a great upcycling project, where cute old drawers were installed on a tall wooden structure to create original tiered planters. via mylove2create

This smooth natural wood bench is quite unusual as tall planters were created at both ends using matching wood boxes. via shanty-2-chic 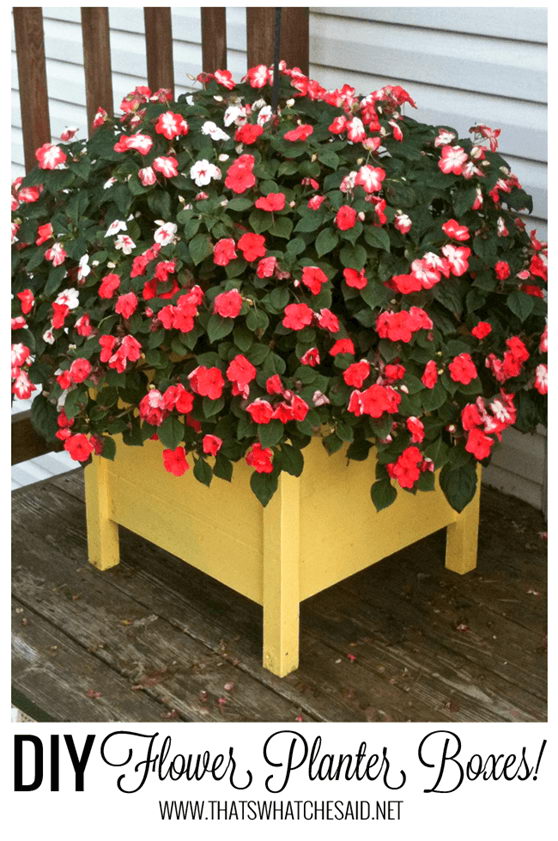 It is a very traditional large yet short planter box made from smooth wood planks and suported by thinner feet. The simplicity of these pieces allows the colorful flowers on top to really grab all the attention. via thatswhatchesaid

This could be a simple gray pallet planter box, but it was given a nice twist with a black stenciled raven on the side, which sets it apart from other similar pieces. via boxycolonial

This site uses Akismet to reduce spam. Learn how your comment data is processed.